When I woke just before 6am on race day, the rain was bouncing off the ground. I wouldn’t need sunscreen and sunglasses, for the Edinburgh Half Marathon, that was for sure. 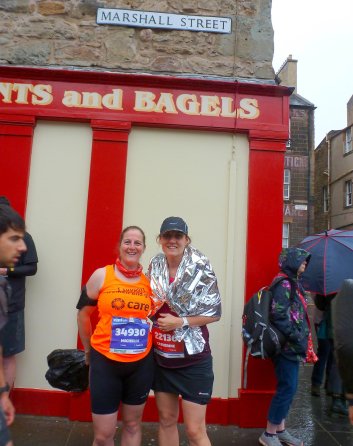 My brilliant pal Lesley who had offered me a place to stay and race support for the day got me incredibly close to the start of the race, in the centre of the city. I wrapped myself in a bin bag and walked towards the coloured flags marking the start areas. On the way I was very happy to chance across two great running friends, Kate from Edinburgh and Mungai who I know from Newcastle parkrun. With hugs and good lucks all round, we went off to our different start areas.

My only other half marathon experience has been at the Great North Run. This was very different. Runners approached from all directions, but there was no need to get there hours before the start time. We weren’t ‘penned’ into start areas either which was much more relaxing. Although it’s a massive race with thousands of runners taking part, Edinburgh Half Marathon felt much more low key – which was perfect for me.
As the minutes counted down to the start of the race, the rain had dropped to a light drizzle and the air felt warm with anticipation. Although I couldn’t see the start line fro where I was, there was a buzz of excitement and a cheer from the runners all around when it got underway at 8am. Then as we saw runners ahead starting to move off there was another cheer and lots of good luck wishes.

It took about 15 minutes before I crossed the start line and in that time I’d heard lots of different accents and languages, with Dutch, German, Spanish and French runners around me. I wished a couple of French runners ‘Bon chance’, and was off. 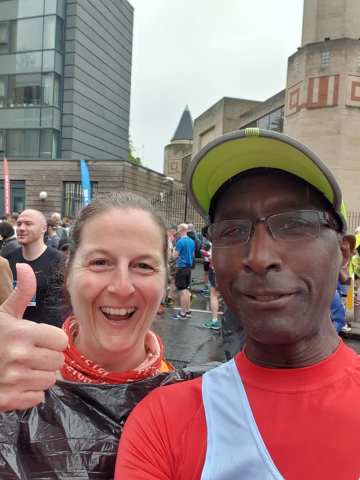 Through the streets of the city, to the bottom of the Royal Mile, by the World’s End pub and then down The Mound. The first three miles or so of this route are downhill and I’d been warned not to go off too fast. But I was running to feel and I felt great. A little pause as we turned onto Princes Street and the route narrowed, but otherwise not too congested.

The light rain was welcome as in the first mile it felt warm and humid, so by the time I got to Holyrood Park, I was actually welcoming the heavier rain drops.

Four ladies in turquoise tops were chatting away, encouraging each other and saying what they were grateful for, so I joined in and discovered they were from Durham. They asked about my bright orange CARE race vest and I told them a bit about the charity.

Somewhere in the park a piper played, and beneath the trees, Jules from Newcastle parkrun spotted me and gave me a shout out. I’d glimpsed at my watch somewhere in the first couple of miles and saw that my pace was a bit faster than I intended. But hey, there was a good bit of downhill and I felt good so I tried not to worry about it and just focused on running easy.

I broke the run down into four sections, to help me stay focused on the miles I was running, not the miles that lay ahead. The first 5k went by in a flash and I gave a huge smile as I caught sight of the sea. If this was the Great North Run, there would only be a mile to go!

I grabbed some water on the prom as it was pretty warm, despite the rain, and I didn’t want to suffer later on. I managed to keep moving through the water station and dropped my bottle in the bin. The race organisers claim this was the first race in the UK with zero waste to landfill, so I was happy to do my bit to help them clear up.

It really enjoyed running alongside the water, with the sound of the waves. It was pretty grey and misty though, so instead of looking out at the views, I drank in the support from the houses along the route.

There were great little cheering points from various charities all along the way. There were some great signs like ‘hit for more power’ and ‘where are you all going?’. My absolute favourites along the route were ‘Pain is French for bread’ and ‘Naked cheerleaders at the finish’. Little boosts and cheers helped keep me smiling and feeling positive all the way.

As six miles approached I glimpsed at my watch and saw that I’d been running just over an hour. If I could keep that up, I’d be on for an amazing time. I was pretty sure I’d gone through 10k faster than I’d raced it on a hot Easter Sunday. That did make me think I’d really gone off too fast, but I still felt in control of the effort I was putting in. Keep going then…

There was a runner wearing a black innovate back pack and an orange cap that I’d seen on and off from the start. I used her as a bit of a pace marker until about 8 miles when I felt that I was running with the same effort, but going at a slower pace. She disappeared into the colourful crowd of runners ahead.

Around here I became aware of a runner on my right hand side, and I heard a sort of catch in her breath, like she was close to crying. “You ok?” I said and gave her the thumbs up. “Yeah fine” she replied. “I’ve been there, I know…” I thought.

My memories of the route get a bit blurry after this. Somewhere along the way, we turned away from the water and started to run back along roads, where more crowds were gathered. I knew Lesley would be out there somewhere and she appeared at about 10 miles, giving me a shout out. This was at the start of a long out and back, where you couldn’t see the turn around point for miles.

There was also music pumping out from a sound system and as I was approaching it was reaching the crescendo of Pet Shop Boys “It’s a Sin” which is a stonking track to run to and felt like it was timed just for me.

So, just a parkrun to go, and I knew simultaneously that I wasn’t running as fast as I had earlier in the race, but also that I was going to run every step of the way. My strength and power were waning, but I knew I had plenty left to get to the end without walking, so I just had to focus mentally and keep pushing.

I really dug deep mentally here, saying to myself ‘relax and push on’. I didn’t look at my watch, but thought I only had about 20 minutes left to run, even if I was slowing down.  I was also distracted by chasing down a couple of runners in morph suits dressed as Deadpool and Spiderman, complete with running kilts. I thought they were great costumes.

I reckon the 12 mile marker was a good bit past 12 miles but it did give me a moment of thinking ‘crikey, still a mile and a bit to go’. I tried my best not to slow too much, and kept putting in the same amount of effort, but it felt like my hips were staring to stiffen up and I couldn’t get my legs to move any faster.

A marshal shouted ‘Just around the corner now…honestly’ and I believed her. I couldn’t see the finish from the road, but I felt runners around me start to pick up the pace. I saw the sign for 26 miles for the marathon finish, but still determined not to power on until I could see the finish gantry.

A last turn and down some bouncy duck-boards over the grass towards the finish line. That was a bit of a shock to my legs, but I still managed a quick Scribbler sprint over the last few metres to the finish. I don’t think I even remembered to do an arms aloft and smile for the race photo. But I was done. And I felt great.

After I finished, I saw the runners in turquoise tops. It had been an emotional run for one of them who had run in memory of a friend who died and was being comforted by her pals. I gave her a hug too. It felt like we’d made friends for a few moments on the run.

And then the lady who I’d checked in with somewhere along Portobello saw me and said thanks, I’d just given here a boost when she needed it. That made me feel good. I hadn’t needed it in that race, but there’s been many a time I’ve been grateful for a word, an acknowledgement, an encouragement from another runner or supporter. And I know I’ll be grateful for the same again.

In summary, I really couldn’t have asked for a better race. Edinburgh Half Marathon is well organised, well supported and a really good route for runners. I was really proud to run for CARE International UK in the first of two half marathons this year. I know that any money I raise in sponsorship will go to support people, especially women and girls, work their way to better opportunities.

I'm a writer, based in the North East of England. In my working life I give a human voice to business communications. As well as writing, reading and language, I enjoy running and triathlons and I often write about races and events in the North East View all posts by The Scribbler

2 thoughts on “Edinburgh Half Marathon 2019”

I'm a writer, runner and triathlete based in the North East of England.
I write about training for triathlon and races I take part in, and review fitness gadgets and products